END_OF_DOCUMENT_TOKEN_TO_BE_REPLACED

When Major League Baseball released it’s tentative 2013 schedule back in Sept. 2012, there were some glaring changes compared to years past.

Most changes occurred due to the Houston Astros moving from the National League Central to the American League West — for the first time ever, MLB has 15 teams in each league and five teams in all six divisions.

The Astros move means teams will now play 19 games against each divisional opponent — 76 games total. Those games will be played in six series (three at home and three on the road). This change, along with the heavy load of divisional games in Sept. should make division races more competitive, especially down the stretch. 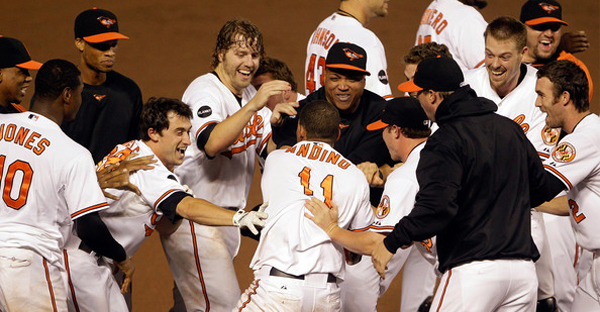 The 2011 season ending was considered one of the most memorable in baseball history, including the O’s eliminating the Red Sox on the final day of the regular season. (Rob Carr/Getty Images North America)

For the Baltimore Orioles, the month of Sept. includes 28 games with just seven outside of the AL East (9/2 – 9/8 against the Cleveland Indians and Chicago White Sox).