“Something magic happens every time you go…”

The opening lyric of “Orioles Magic,” what has been the Orioles’ anthem for over 40 years, definitely applied to the 2012 Baltimore Orioles. Last season’s Orioles team defied all odds by staying competitive in, what is usually deemed Major League Baseball’s toughest division, the American League East, with a negative run differential for most of the season, a 20th ranked team batting average, and an 14th ranked team ERA.

In the March 2012 edition of ESPN the Magazine’s MLB preview, Buster Olney wrote that the best-case scenario for the 2012 O’s was:

“Left-handers Brian Matsuz and Zach Britton make major strides before the team is crushed under the weight of a powerful division. For the sixth straight year, Baltimore fails to win 70 games; for the 15th straight year, the team has a losing record. Yes, this is the best-case scenario.”

That wasn’t the case.

The Orioles stayed competitive by winning close games. The team posted a 29-9 record in one-run games. The .763 win percentage to go along with it was the third best in MLB history, trailing only teams from the late-1800’s.  Baltimore was 16-2 in extra-inning games, all of those wins were consecutive. The MLB record for such a streak — the 1949 Cleveland Indians won 17.

Baltimore finished second in the AL East, trailing the New York Yankees by just 2 games. Their team record of 93-69 was the best record posted by the franchise since their last playoff appearance in 1997. The O’s were participants in MLB’s newly-expanded playoffs. In the first wild card playoff, the Orioles traveled to Arlington, Texas to face the back-to-back defending American League champion Texas Rangers.

Behind a gutsy pitching performance by Joe Saunders and the Oriole bullpen, the O’s defeated the Rangers 5-1 and advanced to the American League Division Series for the first time since that ’97 playoff run. In the ALDS, the Orioles met the Bronx Bombers and eventually bowed out after a five-game series. 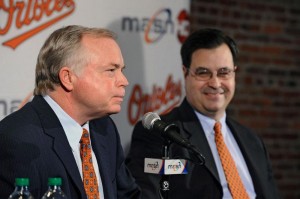 The Orioles began their 2012 campaign by hiring Dan Duquette as their new executive vice president of baseball operations. Duquette, the man credited with building the Boston Red Sox into the 2004 World Series champions, had not held a job in MLB since being dismissed as Boston’s GM in 2002.

Under the supervision of manager Buck Showalter, the Orioles began making strides to a positive future in 2010. Showalter has a record of developing teams, which is what led former Orioles President of Baseball Operations, Andy MacPhail, to hiring him.

“Buck Showalter’s proven track record makes him the right choice for manager of the Orioles,” MacPhail said in July 2010. “We believe Buck’s extensive experience and expertise will be a major benefit to us as we look towards a more successful future.”

In the two months following Showalter’s hiring, the Orioles went 34-23. Showalter had led the O’s to more wins in the final two months of the 2010 season than the team won in the four months prior.

In 2011, Baltimore bonded together and played what some called playoff-intensity baseball. In the final month, the Orioles played the Red Sox 7 times, Boston lost 5 of those games, including the season finale on Sept. 28. The Red Sox loss and Tampa Bay Rays win that same night officially eliminated Boston from the postseason picture.

“Every game has a different star, that’s the magic of Orioles baseball…”

It seemed every night there was a different hero for the O’s. When the star players failed to perform, the role/depth players got the job done.

Players like Taylor Teagarden, acquired from the Rangers in Dec. 2011, who had just 9 hits last season become the unlikeliest heroes. 3 of Teagarden’s hits won the game for the Orioles, just as his 18th-inning double in Seattle did on Sept. 18.

Baltimore has its “steady Eddie” players as well. Adam Jones played in all 168 games for Baltimore. His .287 batting average, 82 RBIs and 32 home runs paced the offense all season long. According to the Elias Sports Bureau, Jones is the first player ever to hit 4 homers in the 11th inning or later. Talk about clutch.

Matt Wieters has been another key figure for the O’s, not just at the plate, but behind it as well. Wieters threw out 39 percent of the runners attempting to steal bases on him last year and earned a gold glove in the process. His 83 RBI ranked second the team.

Chris Davis, acquired from the Rangers in July 2011, played the role of first baseman and designated hitter in 2012. He hit a team high 33 homers and also led the team in RBIs with 85. Despite ranking 6th in the AL in strike outs with 169, Davis batted .270 for the year.

Baltimore also welcomed the arrival of two of the organization’s top prospects in 2012, Manny Machado and Dylan Bundy. 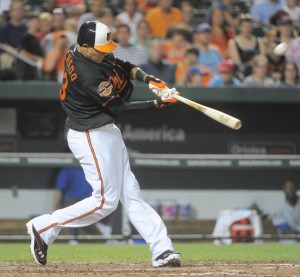 Machado, the Orioles 3rd overall pick in the 2010 draft, was called up on Aug. 9. In his second game in Baltimore, Machado hit his first 2 big league home runs (and both were caught by the same 15-year-old fan). Machado’s biggest impact came in the field, as he’s committed only 5 errors at third base in 51 games. An area the Orioles struggled to solidify earlier in the year.

Bundy, a 19-year-old pitching phenom drafted 4th overall in the 2011 draft, was called up to the majors on Sept. 19. Bundy had put up stellar numbers in the minors, such as his 9-3 record, with 119 strike outs and a 2.08 ERA in 23 starts at lower-A Delmarva, upper-A Frederick and Double-A Bowie. In 2012, Bundy pitched in just 2 games with the birds but is expected to contribute more in the upcoming season.

After a successful 2012 season and a quiet offseason, the Orioles turn their attention to the 2013 season. For the first time in a long time expectations are high in the Charm City, the journey will begin again on Feb. 11 when pitchers and catchers are scheduled to report for spring training.